ABC Australia : US students lobby to carry guns at university 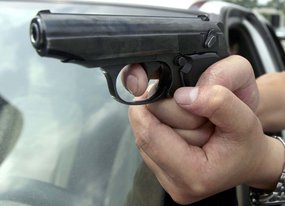 Some students insist they have a right to self defence and that arming themselves could prevent a tragedy. (Getty Images: China Photos) On the eve of the first anniversary of America's worst campus shooting, a growing number of US university students are demanding the right to carry guns to class.
Their push began after a lone gunman shot dead 32 students and teachers at Virginia Tech.
While most American universities ban weapons, these students insist they have a right to self defence and that arming themselves could prevent a tragedy.
As winter slowly turns to spring, families and friends of the 32 people shot dead at Virginia Tech a year ago are preparing for a day of remembrance.
But despite enduring such a tragedy, Virginia Tech is now home to the biggest chapter of a new group called Students for Concealed Carry on Campus.
Formed in the wake of the shootings, this group now boasts 25,000 members who want the right to carry concealed weapons on university grounds.
Andrew Dysart is a former marine who is in his final semester of a criminal justice degree. He heads the George Mason University chapter of the group.
"We're a group of students that many of us already for different reasons carry concealed handguns legally off campus every day of our lives," he said.
"We just believe that we should be able to have that same ability on campus.
"I got a concealed handgun permit when I was still in the marine corps and then afterwards started looking at different things and carrying a handgun for self-defence at different times when I thought it was necessary."
He says if he was allowed to carry his weapon, he is confident in his ability to operate it and would be prepared to use it if somebody suddenly started shooting in the cafeteria or in the classroom.
"I am. That other aspect is also of just removing the stigma from college campuses that criminals can come on campus and have their will," he said.
Risks Brian Siebel is a senior attorney at the Washington-based Brady Centre to Prevent Gun Violence.
"We've all seen the images of Animal House, and I'm sure there's the equivalent in Australia," he said.
"You know Australians like their beer, right? So certainly this is a risk and we know from a couple of studies done by Harvard researchers that college gun owners actually engage in much higher risk behaviour than the average college student.
"They're more likely than the average student to binge drink and use drugs and get in trouble with police and get arrested for drunk driving."
Utah is the only state which allows concealed weapons on uni campuses, although 16 other states have considered, but not passed similar legislation in the last year.
"The Virginia Tech shooter, had he applied in the state of Virginia for a concealed carry licence, would have been issued one before these attacks and the same would have happened for many of the people who have engaged in school shootings," Mr Siebel said.
Officials at Virginia Tech say the only guns they want on campus are the ones carried by police.
I

Officials at Virginia Tech say the only guns they want on campus are the ones carried by police.
Click to expand...

Hell, I'll gladly carry an HK USP, Beretta 92F, or whatever police-issue gun to which he is referring
E

Brian Siebel is a senior attorney at the Washington-based Brady Centre to Prevent Gun Violence.

"We've all seen the images of Animal House, and I'm sure there's the equivalent in Australia," he said.

"You know Australians like their beer, right? So certainly this is a risk and we know from a couple of studies done by Harvard researchers that college gun owners actually engage in much higher risk behaviour than the average college student.

"They're more likely than the average student to binge drink and use drugs and get in trouble with police and get arrested for drunk driving."
Click to expand...

Italics mine.
Do I smell bovine excrement? And why do I predict that any such study is going to have the name "David Hemenway" attached to it?

ETA: I was right. Andhwere's a second study. So yeah, that's a couple of studies. Note however, that both studies, the first one from 1997 and the second one from 2001, were done by the same three researchers (Hemenway, Miller and Wechsler). Now, normally in science, a study's findings are considered valid if they can be replicated; that is to say, if someone else follows the same protocol and comes up with similar results. The key phrase there, however, is "someone else." If you look at the footnotes, morover, you find that an awful lot of the cited references are to other studies that involved one or more of the same three people (Hemenway, Miller and Wechsler). There's no rule against it, but using your own previous research to support the findings of your current research should raise warning flags, because it's very often a sign that the researcher has an agenda and is pursuing a predetermined conclusion.

Miller and Hemenway in particular are known for doing a lot of research all of which concludes that guns are a "public health threat." Especialy when it comes to statistical analysis, when the same people keep producing the same kind of result, you ought to be suspicious, and not take their conclusions at face value.

So what's wrong with this study (I use singular because it's really the same study done twice)? I can see one problem in the phrasing of the questions:

The key question in this study was "Do you have a working firearm with you at college?"
Click to expand...

We find that the term "gun owner" is subsequently used to indicate people who responded to this question in the affirmative. This raises a problem, however. I don't have a working firearm with me at college, because college rules prohibit possession on campus, so I leave mine at home. I am, however, still a gun owner in the common sense of the term (i.e. I own one or more guns).

Now, these studies were performed in 1997 and 2001. I'm not entirely sure when campus gun bans became commonplace, but I suspect it's safe to assume that they were already widespread in 1997, and almost universal in 2001. I notice that the researchers did not ask whether "having a working firearm with you at college" was permitted by campus regulations, but I think it's fairly safe to assume that in a large number of cases, it was not. Indeed, the earlier study notes that "Possessing guns on college campuses is usually prohibited by institutional policy." So we find that the group of people to whom the study refers as "gun owners" are, in fact, only a subset of gun owners, and specifically those who with some frequency violate campus regs on carrying.

It therefore seems more reasonable to conclude that people who are likely to disobey one set of rules (those against carrying on campus) are also more likely than the general population to violate other sets of rules as well (such as those prohibiting drug users from possessing firearms, and those against operating a motor vehicle while under the influence). Not quite as shocking a conclusion, it is?

Certainly, Siebel is seriously misrepresenting what the studies actually found. But then, he works at the Brady Center, so no surprise there either.

http://www.upi.com/NewsTrack/Top_News/2008/04/15/students_push_for_guns_on_campuses/8802/
Students push for guns on campuses
Published: April 15, 2008 at 8:48 PM
Wanting to prevent future U.S. college shootings, Students for Concealed Carry on Campus is calling on those with weapons permits to bring guns to school.

The group, which began at the University of North Texas, says it has more than 25,000 members at more than 300 chapters in 44 states, Stateline.org reported Tuesday.

"The government's telling us that we don't have the means to defend ourselves, and the criminals are just going to go and break that law, and we're left having to deal with the consequences," said Mark Cooper, the group's campus leader at Mississippi State University.

Stateline reported that in 48 states, citizens who get concealed weapons permits can carry guns in public areas, but 16 states explicitly ban firearms on college campuses, and the rest of the states allow colleges to make the decision.

The student guns group argues that colleges should allow weapons on their campuses because criminals don't adhere to weapons bans.

"Gun-free zones on college campuses are not working, and they're not creating a safer environment for students," said Andrew Dysart, group's campus leader at George Mason University in Virginia.
E

Wanting to prevent future U.S. college shootings, Students for Concealed Carry on Campus is calling on those with weapons permits to bring guns to school.
Click to expand...

That's very badly worded; it could be readily interpreted to mean that SCCC wants CCW permit holders to carry in violation of campus regs, possibly state law. Which is explicitly not the case.
You must log in or register to reply here.
Share:
Facebook Twitter Reddit Pinterest Tumblr WhatsApp Email Link
Top