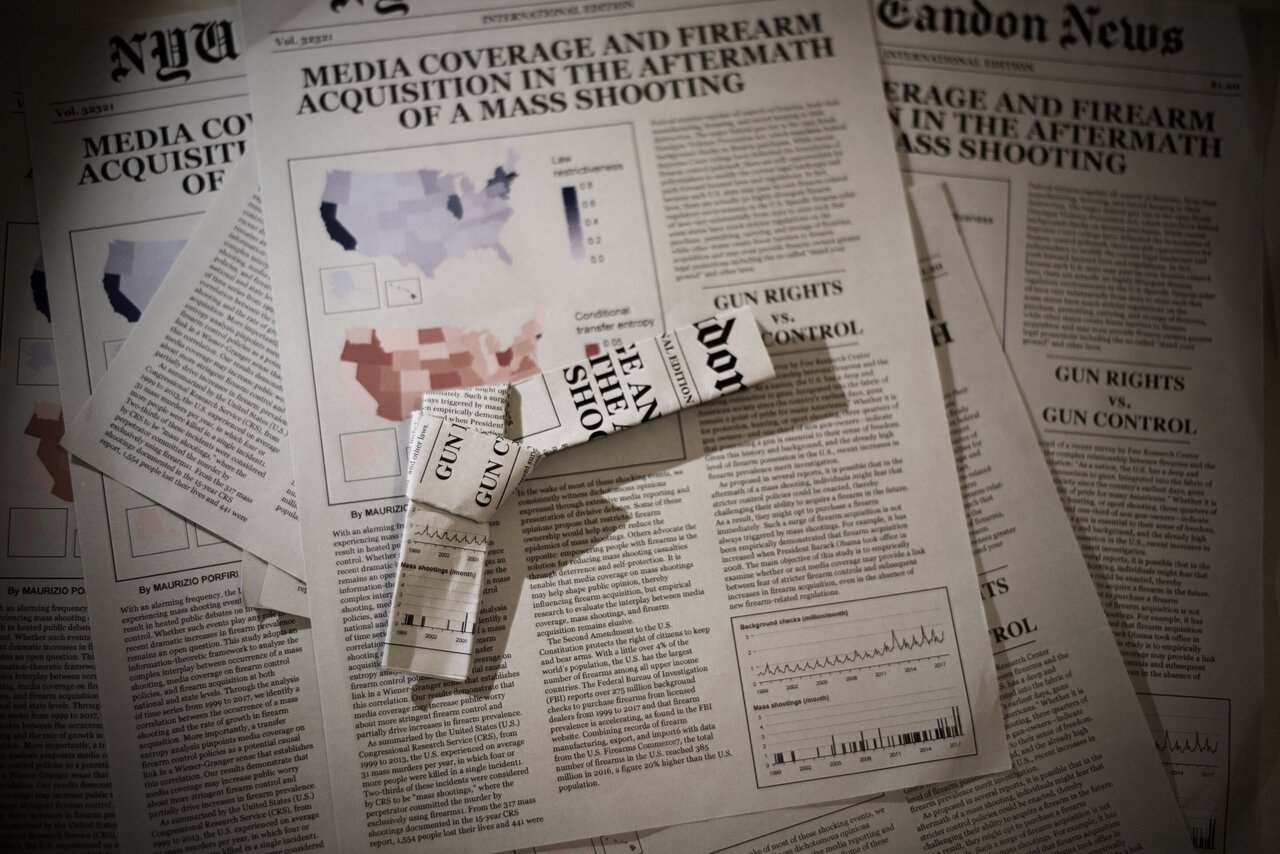 For the first time, researchers have shown a causal link between print news media coverage of U.S. gun control policy in the wake of mass shooting events and increases in firearm acquisition, particularly in states with the least restrictive gun laws.

...great, guns are now a ecological disaster waiting to happen...oh yeah...and NEWSWEEK magazine warned that we were heading into a deadly ice age back in the mid 70's.

Remember, correlation is not causation, but causation is causation.

...and muddying the waters is not the same as muddy waters...

From the study: “For example, it has been empirically demonstrated that firearm acquisition increased when President Barack Obama took office in 2008 (ref. 17)”.

“Beyond simple correlations between time series, we adopt an information-theoretic approach that is designed to test for influences between each possible pair of the triad. The framework is built on the information-theoretic construct of transfer entropy, which allows for the inference of directional interactions in networks of coupled dynamical systems. Transfer entropy measures the extent to which the prediction of the future of a system from its present is improved due to additional knowledge about the present state of another system and can be considered a form of causal inference in a Wiener–Granger sense. [FN elided]”

Professor Volokh commented on this in his VC blog.
Last edited: Jun 25, 2019

...Obama then...climate now...cuz we don't have Obama now, but we do have climate...now...not much going on up in the Great White North I surmise...

With an alarming frequency, the United States is experiencing mass shooting events, which often result in heated public debates on firearm control.
Click to expand...

Based on the first sentence of the "Abstract" why would I waist my time. The actual non-sentence says: "With an alarming frequency which often result in heated public debates on firearm control. What does that mean?

With that said, it doesn't matter if it is guns or better, when people are threatened with loosing their access to a commodity they will hoard that item. It is a simple economic principle, supply and demand.
Last edited: Jun 25, 2019

In conclusion, in the wake of a mass shooting, the media extensively covers the topic of firearm laws and regulations, bringing forward divergent viewpoints and hypothetical scenarios that resonate with the public. Many firearm control advocates regard the aftermath of a mass shooting to be a fertile policy window: as people’s attention is captured by these gruesome incidents, more restrictive policies might gain traction among policymakers, and legislatures may become more amenable to change. However, this increased attention may elicit a parallel reaction, in which people may fear that their access to firearms will be soon restrained and, thus, opt to purchase firearms before this happens. The present study offers empirical evidence in favour of such a snowball effect, in the form of a directed link from media coverage on firearm control policies to firearm acquisition nationwide and in states with less restrictive firearm laws.
Click to expand...

Let’s see for validation...
1. only 68 ‘mass’ shootings in 18 years [uh whose definition(s) of mass shootings were used?]
2. Only two (2) newspapers articles analyzed not newspeek broadcasters, but newspeek media
3. Only seven (7) states used in the analysis.

So engineers used an ill defined hypothesis definition to start off with, with extremely limited newspeek coverage - 2, coupled with only 14% of the available states sample surveyed ~ ya doug...i see where this could lead to a unquestionably viable, repeatable, causation theory which would change absolutely nothing.

I do hope the presiding chair would see through the ruse and not grant these authors the graduate degrees since their nonsense defies the precept of ~ lies, darn lies, & statistics

color of law said:
Patootie in 𝄢
Click to expand...

Yes, I know that you write as carefully as you think. TTFN

The OP's linked "study" excludes [gun] crimes related to gang activity...how convenient...three or more gang-bangers killed in a shooting are not a mass shooting...oh-kay...