Frank is cool. He misunderstood. He made a mistake. He strove to understand. He fixed the mistake.

That is the definition of a stand-up guy. I am sorry that I live nowhere near Frank's place, or I'd make it a point to spend some money there.

SPOProds said:
Frank has responded and feel it's a great response and we are welcome to OC once again
Click to expand...

Finally, a reasoned response. I'm glad he took the time to understand the importance of communication, instead of just digging in further.
N

I dont usually thread much at other states but this was interesting to me. Here in NC we have a gun store that has a HUGE sign at the front door saying "do not unholster any loaded firearms in this store" for the same reason. I think they misworded it. There are some dumb sh^ts out there who dont think about muzzle control. Im glad it got resolved.

eye95 said:
Frank is cool. He misunderstood. He made a mistake. He strove to understand. He fixed the mistake.

That is the definition of a stand-up guy. I am sorry that I live nowhere near Frank's place, or I'd make it a point to spend some money there.

I agree. Too bad it is so far. If he does Internet/Mail Order, we might still do business.

It's a little late, but I saw this picture and thought MMS should try and get their hands on one of these: 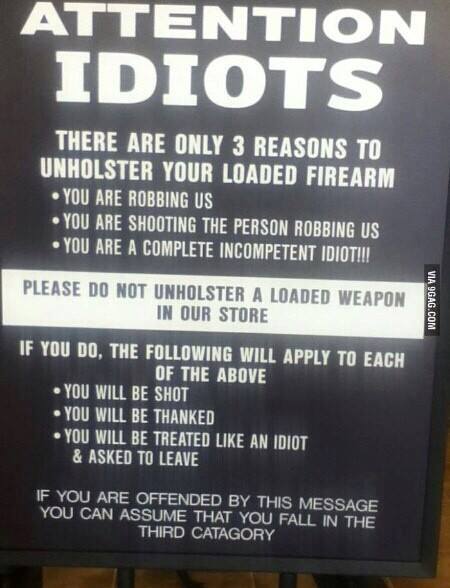 Saw that a couple weeks ago. Good stuff!

Sent from the back of a black van

Great sign. We should offer to buy one for every establishment that currently has a gunbuster sign.

Yes. I've emailed this to Frank at MMS as a suggestion.

Sent from the back of a black van

I love that sign. If I had a gun store I'd probably post something like that on the door. Funny yet also gets the point across.
I've seen people in stores pull out loaded pistols and try out holsters with them. I never felt comfortable around them because, sooner or later, I'd see someone with a finger on the trigger or the gun would sweep a customer or staff member.
About 2 years ago I stopped by a local gun/police supply store to check out their holster selection. I was carrying my EDC pistol openly as usual and the counter guy recommended a particular holster. The holster wasn't specifically labeled for the make/model of pistol I was carrying and I was a bit hesitant to take the clerks word for it. He told me to try it out with my pistol.
"No, man." I told him, "The gun's loaded. It wouldn't be cool to be pulling it out in your store. I'll come back another time with it unloaded."
The clerk told me that it was OK with him if I cleared it and handed it to him. I looked around the shop, saw another customer browsing and told him that I was going to unholster and clear to check out the fit of a holster and if he had any problem. He said he was good with it.
So, I got a good master grip, finger clear of the trigger, cleared the holster and pointed the gun down toward a display of Magnum Hitech boots. I figured, if I screwed up I would end up buying a couple of boots. I dropped the mag, racked the slide and locked it back and showed the clerk like he was the Range Officer at a USPSA match. The clerk chuckled and, as I set it down on the counter, said "You've done that a few times before haven't you?"
After he showed me the fit of the gun in the holster he handed me the gun back and I reloaded, still aiming at that stack of Magnum boots. I thanked him for allowing me to handle my gun in the store and was told that he didn't have a problem with it as long as we did it just like that. His problem was the Fudds who show up and start messing with their gun without asking and then doing unsafe things. He was impressed that I was able to unload and reload in a safe and responsible manner in front of him. Since I was there earlier dropping off pamphlets for our Open Carry organization I am glad that I made a good impression on behalf of other open carriers he may encounter.
You must log in or register to reply here.
Share:
Facebook Twitter Reddit Pinterest Tumblr WhatsApp Email Link
Top