Why the sudden rash in "mass shootings"?

Sure, the shooters are crazy people, who form a random element in society. So it's theoretically possible that all the sudden instances are merely coincidental. But I don't believe it. I think someone acting on behalf of the fascists has been roiling up crazy young men to goad them into "direct action" in order to support public fear in order to overcome legal objections to regulation of the right to bear arms. Since the U.S. has been doing domestic surveillance, particularly with respect to "social media", they have the capability to identify such whackoes pretty easily (I know, I wrote some of the earliest software used for that sort of purpose in the early 1980's on a contract to "A Government Agency"). I'll bet they're using AI algorithms to participate in online FPS games designed to locate and identify such people. And once found, someone can buddy-up to them and work them into a frenzy, suggest tactics, etc. And, having created mass hysteria out of engineered violence, they propose to sail in and solve the problem for us. Just as when that government agency was importing huge amounts of cocaine into the U.S. to fund the secret parts of the war in Nicaragua, and Reactionary Bush said, in effect, "Just give us more money and power and we'll solve the problems associated with drug violence."

"You can trust me, I'm from the Government and I'm here to help you."

Well, and now we're sending missiles to Ukraine, conditioned on their sincere promise not to use them offensively against targets inside Russia. So, that precedent having been established, what if, instead of "gun control", we just sincerely promise to use the guns for defensive purposes only?

Some other issues regarding proposed Senate bills re: gun control -
- state law sets age of majority for each state
- in states in which the age of majority is 18, and congress passes a law that says 18-20 y.o. can't buy rifles, that's a violation of the right to equal protection
- the second amendment is an amendment, thus takes precedence over all conflicting prior documentation, including the supremacy clause, regulation of interstate commerce, as well as management of the economy and the "postal roads". The amendments are not merely extra provisions tacked-on after the fact.

Congress lacks the authority to do what it's attempting.

Congress lacks the authority to do what it's attempting.
Click to expand...

You know that and I know that; but whose army is going to stop those enforcing congresses will? 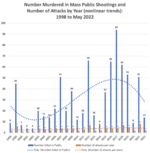 Another thing that's changed is the definition of "mass shootings" - we used to use that phrase when there were like thirty people killed. Now I think it means "three or more".

They had a "mass shooting" yesterday in D.C., or maybe it was the day before. I thought it was getting too absurd, because this time, the four people killed were killed within hours of each other in the same neighborhood but in different gang fights, and completely unrelated incidents.

as to why there are more...always remember a couple of things...from 1981 [2+2=5 so terrorist = mass shootings & apologies to Orwellian followers]
quote
"...symbiotic relationship exists between the news media and perpetrators of spectacular terrorist incidents. There is simply no way that the Western media can ignore an event that has been fashioned
specifically for their needs.

The two are in a symbiotic relationship, so that any restriction of one narrows the bounds of the other, To be free means that the media are open to capture by spectacular events. And the media have been captured, have proven totally defenseless, absolutely vulnerable. Of all the foundations of a free democratic society, that most basic - the freedom to know. to be informed - has guaranteed that such knowledge and such information can be fashioned by the fanatic through the conduit of the media eye.

Specifically, it is alleged that media coverage of terrorist events has some or all of the following effects:
1. it provides a platform for the expression of extremist views which provoke violence and undermine the authority of the state.
2. the reporting of spectacular terrorist incidents has a contagion effect which increases the probably that others will
emulate the violence being reported.
3. coverage of an ongoing incident hinders effective police operations and may place the lives of hostages and police in jeopardy
4. coverage of an ongoing incident puts pressure on the authorities which limits their powers of decision-making
5. the large number of reporters at and extent of coverage of a terrorist incident reinforces the terrorists' sense, of power and, particularly in the case of deranged terrorists, may contribute significantly to the prolonging of the incident or to an increase in its serious consequences
6. related to the contagion effect is the claim that excessive detail of both terrorist and counter-terrorist operations supplies disaffected groups with strategic information and technical knowledge which make the resolution of future terrorist incidents more difficult
7. the competitive nature of news gathering places an undue emphasis on the sensational aspects of terrorist events and makes entertainment of public violence rather than performing a public duty to inform
8. the instantaneous reporting of terrorist incidents and the existence of some news gathering practices (such as telephone contact with terrorists in the course of an (incident) make reporters participants in, rather than observers at, a terrorist event and diminish the ability of the media to report objectively."

No question about all that - but the sudden rash of similar acts in various places looks like a co-ordinated effort by someone behind the scenes to me. Sure, it's a "conspiracy theory", and there's no evidence for the conclusion other than the fact of the confluence of apparently coincidental events, the fact that the elements all exist, from the maladjusted malcontents, the "social media", the technology, and the will to conduct "covert operations" on the part of A Government Agency. The key thing is the motive: the greater the fear of guns can be whipped up among the populace generally, the more likely they are to be willing to, as Kamala Harris says, "be unburdened by what has been", such as the Constitution and the Bill of Rights.

So, while I don't know it for a fact, it's certainly plausible, and the leading explanation in my mind. Of course, it could all be pure coincidence, too. But that's implausible, because it's probabalistically too remote. And I'm not smart enough to think of any other plausible explanations. I suppose the CCP/PLA's chain of "China King" restaurants may be locating whackoes and training them in to conduct mass assassinations to destabilize the West, but I doubt if that's likely.

I find it fascinating that jqpublic is sucked into the belief ALL the protester events this past weekend were coordinated by student(s).

From my perspective, these mass shooting events are happening, when there is something going on that they don't want media attention of.

I was doing RSO Duty this past weekend, & one of the Life members/logistical volunteers got into discussing Uvalde & how the shooter was able to get everything he had working at minimum wage. There was also talk about the prevalence of posting plans of attack/events in advance via social media, so law enforcement were aware of the potential actions in advance, but decided to not to intervene until after the fact.

solus said:
I find it fascinating that jqpublic is sucked into the belief ALL the protester events this past weekend were coordinated by student(s).

as the olde song says...'things to make you say....HUMMMMMmmmm'
Click to expand...

If I remember right, the coordination of the protests & the costs was likely thanks to people like Bloomberg & Shannon Watts, as they want to see everyone disarmed, except for active duty law enforcement & military.

Concerning the chastising of law abiding, responsibly armed citizenry, & the feeling of standing alone/bring singled out, the mass media, lately, wants to do nothing but demonize & the brainwashed masses are accepting what they are being spoon fed.

how the newspeek/social/mag articles make their money...

go well in the evergreen state...

Reminds me of the lead-up to the The Great Proletariat Cultural Revolution of 1968-69. Mao's plan was to destroy the culture and economic life of China in order to "build back better".

"They" need to quit copying each others playbook.

I refuse to use that term, I refer to those incidents as mass murder, and attempted murder. That is what it is, the result is the same as a stabbing, being hit in the head with a brick, or golf club. We have had mass killers in the past, they were then known as serial killers, just different methods and timing. As a LEO I remember the Springfield ax murders in 1981, two adults murdered, and one young female left impaired until she eventually died. The result was no different from a shooting. Even if all guns were removed from earth somewhere there would be murders, even serial murders. These people in politics/media act like murder never existed before firearms.