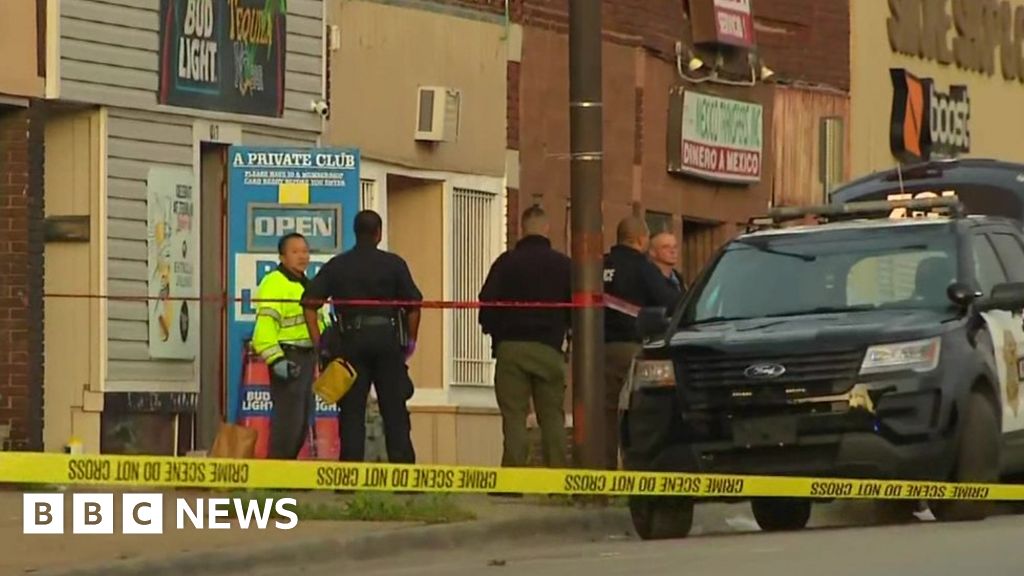 Police believe shots were fired after "an earlier dispute" inside a bar in central Kansas City.
www.bbc.com

Four people have been killed in a shooting at a bar in Kansas City in the midwestern US state of Kansas.
Local police said in a tweet that five other people were wounded during the incident between 10th and Central Avenue.
The police later told the BBC that the suspect, a Hispanic man, was on the run after the incident.
Further details about the motive and whereabouts of the gunman are still unclear.
Local media report that shots were fired at about 01:30 local time (06:30 GMT). They say a handgun was used at Tequila KC, a bar in the city centre.

The incident comes just weeks after two separate shootings in Texas, which left 44 people dead.
So far this year, the US has been hit by more than 40 mass shootings - defined since 2012 as incidents that kill at least three people.

but of real interest & worth viewing, the newspeek blurb also has an interesting propaganda video on “America’s gun laws explained” [i couldn’t manipulate to allow copying]

Repealing the 2A will not eliminate violence.

Repealing the 2A will cause more violence.

mlawson said:
Repealing the 2A will cause more violence.
Click to expand...

not so sure...testosterone bravado notwithstanding, it is this member’s HO the majority of American’s firearm owners will grumble and grouse but will turn in their firearms as have the citizens of other countries who have instituted similar restrictions.

that stated, those economically depressed will join the fracas in the mistaken belief it might improve their lives as well as those who are in it ”just cuz” and it would not have a bloody thing to do with 2A what so ever. [read Ferguso, Watts, Chicago, Philly, Baltimore, ad nauseam]

It would probably be better to be dead than spending the rest of our lives crawling in the dirt. If we "surrender" our Constitutional Rights, we will never know "peace" because the elitists that take those rights away will never let us forget it.

“Of all the tyrannies, a tyranny exercised for the good of its victims may be the most oppressive. It may be better to live under robber barons than under omnipotent moral busybodies. The robber baron’s cruelty may sometimes sleep, his cupidity may at some point be satiated; but those who torment us for our own good will torment us without end, for they do so with the approval of their consciences.” - - C. S. Lewis
Click to expand...

The 2a didn't grant the RTKABA. That right pre existed them 2a, and will exist after the 2a is gone for those who refuse to surrender it.

Ah roll in the Christian rhetoric...
let’s see now CS’s quote was from an eclectic anthology of allegedly unpublished thesis & essays ‘compiled‘ 16 years after his DEATH...

compilation was to reflect Lewis’ analogy of citizen’s, during their judgement, would be placing the Deity on trial...

sorry his quote absolutely does not reflect anything about citizen subservience to another citizen!

Solus - that may be but the underlined part is exactly the way the elitists are acting. They seek to form an oligarchy with them at the top.
Note that I stated "elitists" as they can be found in both major political parties. Part of the problem is that there are more of them on the "lib/progressive" side than on the "conservative" side and those of the former group have a myriad of outside supporters supporting their activities. It is these "globalists" that are pushing the politicians to advance their agenda, an agenda that absolutely requires a populace unable to oppose their thievery.

So if someone publishes an anthology of quotes after someone's death, they didn't actually write it?

Sorry, but Lewis did write it in his lifetime: "The Humanitarian Theory of Punishment" (1949).

KBCraig said:
So if someone publishes an anthology of quotes after someone's death, they didn't actually write it?

Sorry, but Lewis did write it in his lifetime: "The Humanitarian Theory of Punishment" (1949).

First KB, please re-read what I posted..I never stated C. S. Lewis didn’t write the quote. [for the benefit of other readers, The HumanitarianTheory was first published in Australia 5 years after being written as publishers elsewhere refused to print it and while the statement is in Lewis’ 5 page thesis the document’s substance mainly concerns capital punishment]

Second, your Churchman cite is undated

Third, God in the Dock, Published March 24th 1972, is a collection of previously unpublished essays and speeches from C. S. Lewis, collected from many sources after his death. [Lewis died 1963]

Fourth , there is nothing in your post which contradicts my original statement regarding, “sorry his quote absolutely does not reflect anything about citizen subservience to another citizen!”

C. S. Lewis...another Brit...subject of the Crown...nothing more...who does not attempt to address individual liberty (individual choices freely made)...though he did give it a very brief mention in the six pages of his drivel...it's not in his DNA to do so...ironic, given that the Federalist Papers/Anti-Federalist Papers are available that could've furthered his education.
You must log in or register to reply here.
Share:
Facebook Twitter Reddit Pinterest Tumblr WhatsApp Email Share Link
Top